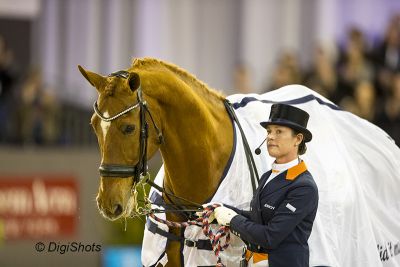 Dressage legend Parzival of Adelinde Cornelissen said farewell to the public on Satuday afternoon. Adelinde said thank you to Parzival and all who contributed to his career. “The best thing is that we did it together. Teamwork makes the dream work.“

Success
The first success came in 2007 when they became indoor Dutch Big Tour Champions followed by the outdoor Dutch Championships title in 2008. They were a solid value for the Dutch dressage team from 2008 till 2016 (except in 2015). During their first European Championship in Windsor, Great Britain, in 2009, they made an important contribution to the gold team medal, but they also won individual gold in the Grand Prix Special (with a new world record of 84.042%) and silver in the Freestyle. The combination won team gold at the 2010 World Championships and in 2011 Adelinde and Parzival won the European title in the Grand Prix Special and the Freestyle in Rotterdam. The Dutch team won the bronze medal. The same year the pair also won the World Cup Final.