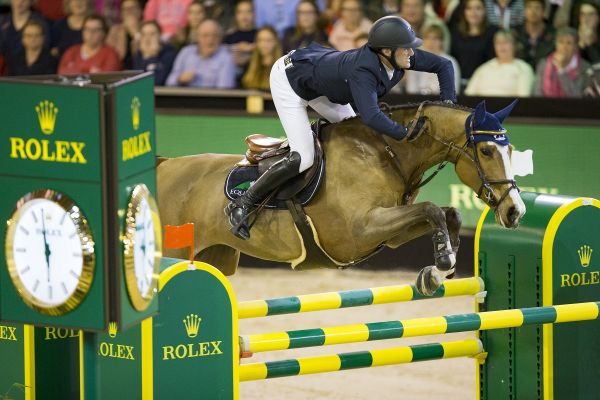 The Dutch Masters-Indoor Brabant could not have wished for a better finale. The Rolex Grand Prix had a thrilling jump-off with 13 combinations. Third starter, Holland’s Jur Vrieling, was the first one to stay clear in the jump-off with VDL Glasgow vh Merelsnest in 39.89 seconds with which he eventually finished in fifth place. It was Marcus Ehning he took over the lead with a clear round in 37.80 seconds. One of the crowd’s favourites, Harrie Smolders, was just 0.09 seconds to slow with Emerald to beat Ehning. He finished in third place. Then only one rider was left to keep Ehning from victory, Belgium’s Niels Bruynseels with Gancia de Muze. Antd that was exactly what he did. He was 0.7 seconds faster than Ehning and took the first prize of €264,000 to Flanders.

Niels Bruynseels has now started his cyclus for the Rolex Grand Slam of Show Jumping title. “I seem to have a special relationships Rolex Grand Prix as I also won the Rolex Grand Prix of Brussels in 2016 and 2017,” he smiles. About his jump-off round he said “Gancia is a very fast horse but I had to take risks anyway.”

Show president Anky van Grunsven was very happy. “We can look back on four fantastic days. I feel honoured to be president of such a great event. The new hall gave us the opportunity to make another step forward. We made the event even more accessible and welcomed just over 60,000 visitors.”