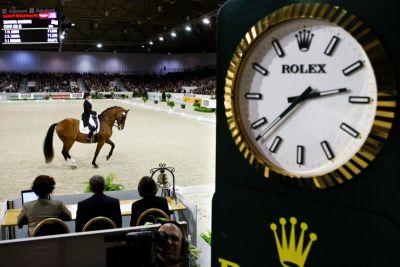 Indoor Brabant is proud to present a top competitor field. All top riders will travel to ‘s-Hertogenbosch and will guarantee absolute top sport in the Brabanthallen from Thursday 20 til Sunday 23 March. The show offers € 675,000 in prizemoney of which € 350.000 for the Rolex Grand Prix.

Jumping
No less than 14 out of the top 20 of the World Ranking List will be competing at Indoor Brabant. Olympic Champion Steve Guerdat and European Champion Roger-Yves Bost (‘Bosty’) open the list. Germany is sending its current strongest team with Ludger Beerbaum, Christian Ahlmann, Marcus Ehning and Hans-Dieter Dreher. Frenchman Bost is joined by his compatriots, top 10 riders Patrice Delaveau and Simon Delestre. Stylish Rolf-Göran Bengtsson from Sweden will return in the competition ring after a groin injury.
But it are not only men competing, there is also a strong field of lady riders: Luciana Diniz for Portugal, Australia’s Edwina Alexander, Katharina Offel, who rides for the Ukraine but lives in Germany, France’s Penelope Leprovost and Janika Sprunger from Switzerland.
Belgium will be represented by Gothenburg Grand Prix winner Nicola Philippaerts and Jos Lansink, who won the 1994 World Cup Final for the Netherlands in ‘s-Hertogenbosch in a spectacular competition.
Holland’s national coach Rob Ehrens appointed a strong Dutch delegation. Of course Maikel van der Vleuten, who has been very successful the last few months. He won the World Cup qualifier in London, and he will be joined by Gerco Schröder, Jeroen van Asten and Leopold van Asten.

The dressage classes will have a great line-up too. One of the favourites is Edward Gal who will have to compete against a strong German team. Isabell Werth and rising star Fabienne Lütkemeier will do everything to avoid Edward taking the top honours.
Italy’s national dressage champion Valentina Truppa is always competitive. British Michael Eilberg and Marcela Krinke-Susmelj are doing very well in this World Cup season and will surely try to gain more points for the Final.
Daniëlle Heijkoop, Hans Peter Minderhoud, Laurens van Lieren, Diederik van Silfhout and Tommie Visser complete the Dutch team.
Unfortunately Charlotte Dujardin had to withdraw because her horse Valegro is not 100 per cent fit.

All dressage riders and horses can be found here.