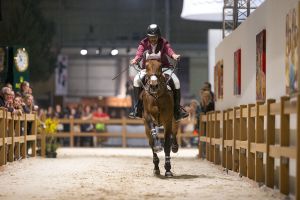 He had the only clear round in the Van Schijndel Bouwgroep Indoor Derby, Hamad Ali Mohamed A Al Attiyah from Qatar. He rode a clear and fast round early in the competition with Levicci and it seemed difficult to better this result. Then it was Maikel van der Vleuten’s turn with the young VDL Groep Quatro. He was nearly two seconds faster and it everybody expected there would be a new leader. But at the last fence things went wrong and four faults were added to his time and he finished in second place. Belgium’s Nicola Philippaerts took third place with Esprit van de Wellington.