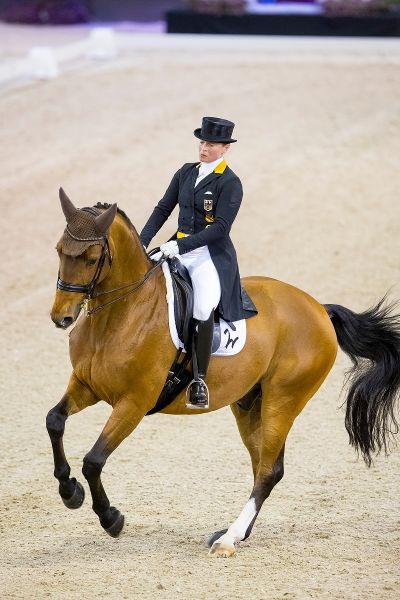 It promises to become an exciting qualification for the FEI World Cup TM Dressage 2017/2018 during The Dutch Masters-Indoor Brabant. It will the last chance for the dressage riders to gain points fort he Final in Paris (10-15 April).

The host country will be represented by their strongest combinations: Edward Gal (Glock’s Zonik N.O.P.), Hans Peter Minderhoud (Zanardi), Madeleine Witte-Vrees (Cennin), Diederik van Silfhout (Four Seasons 19), Patrick van der Meer (Zippo), Emmelie Scholtens (Apache) and Anne Meulendijks (MDH Avanti N.O.P.), who received a wildcard. Currently Edward Gal has 35 points and if he performs well on March 10 he is still able to qualify. “Glock’s Zonik keeps improving. At home he performs perfectly, now we have to show it in the arena. We are going for it.”

Madeleine Witte-Vrees also is still in the race for place in the final with a eighth place in the rankings after Gothenburg. She received points in Lyon (Cennin), London-Olympia (Cennin), Amsterdam (Cennin) and Neumünster (Wynton). National coach of the Dutch dressage riders, Rinie van der Schaft, is optimistic: “We are ready! Last year was not a very good year, but now we have some very strong combinations. We are going to step on the accelerator this season and we will start in the Brabanthallen.”

Strong competition
However, the Dutch dressage riders will have strong competition from abroad. Title defender Isabell Werth will travel to ’s-Hertogenbosch together with Jessica Von Bredow-Werndl. Isabell Werth is automatically qualified for the Final in Paris and Von Bredow-Werndl, ranked third in the standings, is also ensured of a place in the Final. Britain’s Emile Faurie, ranked 8th and Beatriz Ferrer-Salat from Spain, who won the qualifier in Lyon are also coming to the Brabanthallen as well as Belgium's top rider Jorinde Verwimp.

More dressage
In adddition to the World Cup qualification other international dressage classes will be held for Small Tour and U25 combinations as well as competitions for regional riders (including ponies). On Thursday evening Brabant riders will compete in a Pas de Deux class (among them Tineke Bartels and Imke Schellekens-Bartels) as well as a clinic with Anky van Grunsven and Madeleine Witte-Vrees.