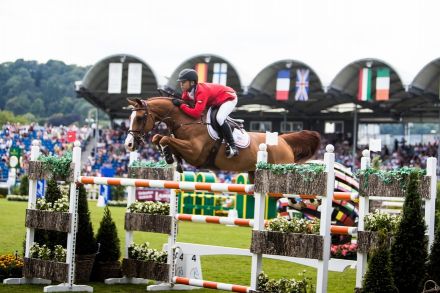 This September, international show jumping fans from around the world will turn their attention to the third Major in the Rolex Grand Slam of Show Jumping, the CP ‘International’, presented by Rolex at the CSIO Spruce Meadows ‘Masters’. Taking place between 4–8 September 2019, the Rocky Mountains of Calgary once again play host to the world’s leading riders and horses for seven days of intense competition and equestrian mastery. The event, which attracts 100,000 spectators to its grounds, has been regarded as one of the leading equestrian events in North America. Rolex has proudly been a supporter of the show since 1989.

The CP ‘International’ presented by Rolex will welcome the most established equestrian athletes from around the globe to compete for the sport’s most coveted prize. Looking ahead to the third Major of the year, there are some competitors who have consistently performed to the highest level and look to be strong contenders heading into the CSIO Spruce Meadows ‘Masters’.

Rolex Grand Slam live contender and Rolex Testimonee Kent Farrington, claimed the top prize at CHIO Aachen this summer, beating seven horse-and-rider combinations in the final round aboard the supreme mare, Gazelle. 40,000 spectators filled CHIO Aachen’s main stadium to watch the unstoppable pair as they flew through the jump-off, producing a clear round in 43.98 seconds. Frequently named one of the fastest riders in the world, the US show jumper has proved time and time again that he is more than capable of taking home the top prize at the next Major.